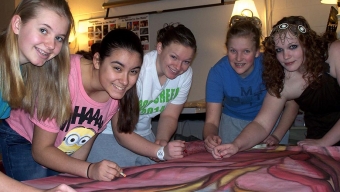 According to Bell, her projects took about 17 hours total. Because she earned a Gold Key on one piece, she also has a chance to be in the American Vision Nominee.

Eshelman created an artwork under drawing that she named “Hands Giving To The Poor.” For her artwork, she got an Honorable Mention, and the artwork will be hanging in a gallery in Wichita Center for the Arts for 10 weeks.

Gallardo also placed an Honorable Mention for her artwork called “Castle In The Vortex of the Sea,” which was under the category of drawing also. Gallardo’s art project took approximately two weeks to accomplish. Gallardo said she was very surprised that she was entered in the competition.

“Well, I took my time and did the best I could do,” Gallardo said.

The next person to get a Honorable Mention was Ruder. Her artwork called “World Peace is Possible” which was under the category of painting.

According to Ruder, this project meant, “You can change the world with just small steps.”

The last Gold Key went to Jensen for her artwork under painting called, “Promote Tolerance and Peace Through Education.”

“All the projects that was awarded with a Gold Key will be sent to nationals, which will be held in New York City,” Delay said.