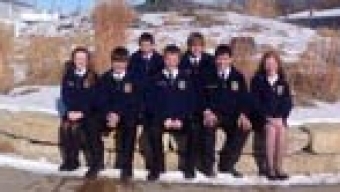 After they were done speaking, the judges ranked them by what their speeches were about and how long they spoke. Then they ranked the top 10 sophomores and the top 10 freshmen. As the final results of the speech contests, Fike placed third in the sophomore division speech, Hinrichsen placed fifth in extemporary speaking and sixth in the creed, Frakes placed sixth in the sophomore division, Havenstein placed 10th in the creed and Wilcox placed 10th in the freshman division. Riffel did not place in the top 10 in his category.

“I am really surprised!” Frakes said. “I got sixth place in the upperclassmen division out of 18 people!”

While Frakes was happy with her success, Brunkow said he was disappointed in his results.

“I did not really have enough information for my speech in extemporary speaking,” Brunkow said.

The overall purpose of the event was to develop speaking skills, which Rock Creek did well. FFA normally does speech contests every year, and students hope to keep doing their best at speaking about agriculture.