News: Student Council holds a ‘squealer’ of a fundraiser 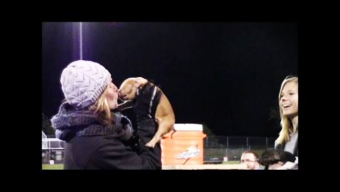 Locking lips with a little squealer, Family and Consumer Science teacher Shelby Muha was the winner of the Student Council “Kiss-a-Pig” fundraiser, held the week of Oct. 25.

Stuco raised around $125 by students and staff donating money towards the teacher who they wanted to have kiss the pig. Stuco got the idea of “Kiss-a-Pig” from other schools at a convention they attended, and members have already discussed sponsoring the event again next year with new faculty members up for nomination.

Physical education teacher and Stuco sponsor Jim Johnston said, “All the money we raised will go towards our Stuco funds for the year.”

Freshman Holly Forrester said, “I wanted Ms. Muha to kiss the pig because she is a comedian, and I thought she would make it really funny.”

Harshbarger and Holliday made an announcement to vote for Muha, but nobody knew who would win until the event was held.

“I didn’t expect to be the one picked, but I was prepared with my new, fancy, red lipstick,” Muha said.

On Oct. 25, during halftime of the Friday night football game against Nemaha Valley, Muha had to kiss the pig.

Muha said, “I was a little bit nervous that it was in front of everyone, but relieved that they were baby pigs.”