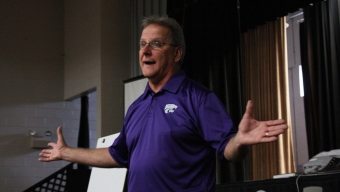 Stuco selected Tracz to speak because he has spoken for many years and sends a valuable message to students about “how good they want to be,” on which his speech is based.

“It was great having Frank come here because Frank is very realistic about the modern life,” Stuco sponsor Jim Johnston said. “He gives the truth about society and what the real world is about and how it is today compared to what it was back then.”

Freshman Miranda Warnow added that “he seems to be closer to the school, and he has spoken here before.”

Freshman Gavin Sauerbrunn said, “I liked Frank speaking to us, and I like him showing the Conan [O’Brien] video for those few minutes.”

Sauerbrunn also thought that the video was what the student body liked the most.

Warnow said, “He was a very energetic person, and he was very funny as well.”

Sauerbrunn had one thing to add to his reaction of the speech, saying, “Frank might change some things next time and talk about more of today’s society,” while Warnow said, “He shouldn’t change anything because he was good, but the video was the best part.”

The students agreed that they would like Tracz, or another speaker, to be invited to Rock Creek again to speak to the students. Both Sauerbrunn and Warnow suggested that a police officer or an ambulance driver may be interesting to hear.

“If Stuco does bring in someone else then they better be pretty good because Frank was a very good speaker,” Sauerbrunn said. “[But], Frank needs come back and talk to us again because he thinks not all of the students got the message about society.”

“Yes, it would be nice to have Frank come back and talk to the students about how much society has changed over the years,” Johnston said.