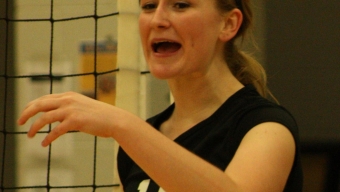 Plummer, who has been playing volleyball since the fourth grade, said the sport is by far her favorite and also added that volleyball is her only sport.

“I wish I played other sports, but I really have just never got involved,” Plummer said, “but I am okay with that because it gave me more time to focus on volleyball.”

In Plummer’s eyes, her most important high school season was her sophomore year.

“That was the season I realized I wanted to play college volleyball, and I realized I had a chance,” Plummer said.

Kansas Wesleyan has a very impressive volleyball resume with an unblemished record in Kansas Collegiate Athletic Conference (KCAC) play at a perfect 8-0 and an overall record of 16-10. Plummer said she hopes to fit right in next year, saying that one of her goals in college is to snag a starting role with the varsity squad as a freshman.

Starting as a true freshman is a pretty lofty goal to have, but there are numerous people who would not be surprised if Plummer achieved the feat. One of these people is Rock Creek volleyball coach Terry Schmitz.

“I think she’ll do fine,” Schmitz said. “There is always an adjustment to the next level, but Kelsey will handle it just fine.”

“He [Schmitz] has been very supportive of me these last four years and has helped with the recruiting process greatly,” Plummer said.

Plummer had her choice of two other schools that offered her volleyball scholarships, Seward County Community College and Northwestern Oklahoma University.

Rock Creek is, in fact, a small school — small enough to make the move back down to the Kansas 3A classification for the 2013-2014 season after being classified as a 4A school for the 2012-2013 season. This move has a favorable outlook for the Rock Creek volleyball team, as they have a significantly better sub-state draw. Plummer has a new sense of optimism about the sub-state draw and hopes to make her senior season one to remember.

Beyond her senior year of high school, Plummer will shift her focus to volleyball at KWU, but also to academics, as she plans to major in sociology and psychology services to be an elementary school counselor. Academics have always come first for Plummer, who has maintained a 4.0 GPA throughout high school.

“I am very excited to go to Kansas Wesleyan and see which direction my life goes from my time there,” Plummer said. “I am so thankful for the opportunities that have been given to me, and I plan to take full advantage of them.”