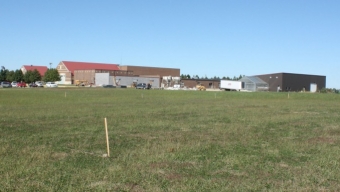 Rock Creek Junior/Senior High School has been considering putting in a new baseball and softball complex for the teams to practice and compete on, but there has been a lot of controversy over whether or not to put these fields in at the school.

Earlier this year, upon seeing a field staked out for softball south of the school building, there was a rumor that a softball field was being built by volunteers, but that is not quite true. While it was an idea, the Board of Education halted the progress so they can decide what should be done.

In most cases, having the fields at Rock Creek would be positive. First, it would keep kids who are in a hurry from being on the highway after school, plus having the fields here would eliminate travel time, which would allow more practice time. Also, having the fields on campus would save students’ money, as they would not
have to pay for the extra gas to get to St. George or Westmoreland. Second, for families with multiple students who participate in both baseball and softball, they would not have to be forced to choose to go to either baseball or softball, as they could go to both in one location. Finally, it would give the baseball and softball players a home field to call their own. To add to that, since the district upgraded the stadium for football and gym for indoor sports, we think that it is only fair that we are provided a home field — or at least
that plans are made to add fields in the near future.

While there are positive aspects, we acknowledge there are some negative parts, too. There are benefits to having the fields in the local communities, where younger students can see the games easily and where we have been playing for a number of years. As baseball coach Chad Herren said, “Westy has been to such a great community throughout the years.” Still, the positives outweigh the negatives.

In concern to the field being staked out as a softball field, that does not mean that there will not be a baseball field. It is just in planning stages, so there is no definite plan right now. But, we would say there is common consensus to have the baseball and softball teams here at home.