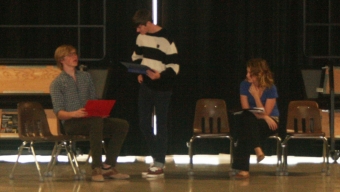 What is the title of the play?

What is the play about?

“A man named Elwood whose best friend is a six-foot tall white rabbit named Harvey. Elwood is the only one who can see Harvey, so their family wants to lock him up in a mental hospital. By the end of the play, they figure out Elwood is the only sane one.”

When is the play?

Who are some of the people involved in the play?

Why did you pick this play to perform?

“One, it fit the number of people with characters. Two, the play is incredibly popular, and three, I am familiar with the play because I performed it in junior high.”

How do you think the play will go overall?

“Really well. We have an excellent cast.”

When you look at the people involved, do you feel like they have talent?

“Part of my contract…but, no, really, I did plays in high school, and it is a great learning experience.”

How do you feel when it is time for your students to perform the play?

“More nervous than when my wife gave birth.”

When the play is over, how do you feel?

When people audition, do they audition for a certain role or do you pick their role?

“Both. It depends on the kid and number of spots.”