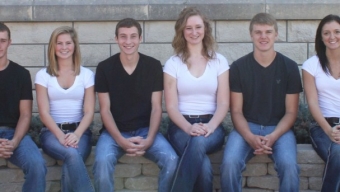 How did you get associated with Homecoming?

“I am a Student Council sponsor.”

What did you think of the Homecoming theme?

“It was good, but it was also hard [to develop ideas] in a way.”

What do you do to help the classes during Homecoming?

“I try to stay out of the way, but if they do have questions, I am happy to help.”

Do you think there were any difficulties during the parade? If so, what were they?

“I thought it ran smoothly, but the traffic was hard to stop since the parade goes down Main Street.”

Are there been any changes you would have for the parade?

During the dance, what was the outcome?  Were there as many students there as you thought there would be?

“Yes, there were a large number of students, and they said they all had fun.”

Compared to this year’s Homecoming, was it as good as other years?

“Not sure, but the crown bearers were good. Student Council also did great for organizing it.”

Do you think Homecoming is a very big deal for Rock Creek?

“Well, for other towns, it is good, but it would be better if it was at one place every year.”

For future Homecomings, do you think anything will change about the parade?

“Don’t know, but if anybody has any ideas, we are open for it.”