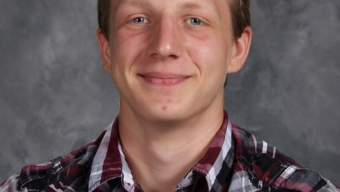 Over the years, there have been many Rock Creek students who have been nominated for the High School Heisman Award in Kansas, but senior Jacob Miller won the statewide award this year.

In order to qualify for the High School Heisman Award, a student must stand out in academics and in athletics, plus have good character. The award is based on work, participation and service during all four years of high school. Miller not only has a high GPA and is near the top of his class, but also participates in many school activities, including football, basketball, debate, forensics and Student Council, to name a few.

When he found out that he had won the award, Miller said his thought was, “Wow, I beat out 45,000 other students in the state,” but said he was actually really surprised.

“I’m glad that the work I accomplished since freshman year paid off in the long run,” Miller said. “I pushed myself and worked to the best of my ability.”

Those who know Miller best were excited to hear that he won the award.

“I knew when he was nominated that he was a good candidate and that he had true potential to win,” football coach Mike Beam said. “When I found out he won, I was impressed and glad to hear it. He pushes himself, and if he wants it, he will go get it.”

Beam added that Miller should be proud of the award, but that he is also modest about winning.

“He is a great student-athlete, and he is also the first person to lend a helping hand when someone needs his help,” Beam said.

Beam said that winning this award is “rare” for a student from smaller schools in Kansas, but when a student performs to the level that Miller has, that student deserves it.

“This is the first in all my years here at Rock Creek,” Beam said. “Though he is the first to win the award from Rock Creek, [it] doesn’t mean we will not have another in the future.”