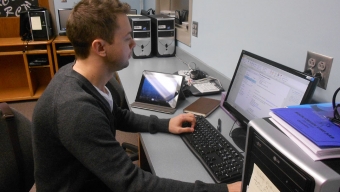 This December, Ruby Zabel retired from her job as the Computer Support Specialist at Rock Creek High School. To fill in her shoes, the district hired Bobby Davis.

Zabel worked as the Computer Support Specialist since 1998, performing various tasks, such as installing computer hardware and software, troubleshooting and fixing computer and network problems and training teachers on new technology.

“I only needed help from Ruby once, and it was a paper jam!” senior JT Weers said.

Zabel will be greatly missed at Rock Creek, according to teachers and students.

“I was very sad when [Spanish teacher] Mrs. Miller said that Ruby was going to be retiring,” junior Morgan Schwinn said.

In Zabel’s last two weeks, she trained Davis, so that he knew how the school’s technology worked.

Davis grew up in Downs, Kan., and attended North Central Kansas Technical College in Beloit. He eventually got a job, working for Apple, in Washington, D.C., where he worked for seven years as a “Lead Genius,” training computer technicians and also fixing Apple products.

“When I worked at Apple, I loved it, and it was awesome,” Davis said.

Wanting to return to Kansas, Davis moved to Westmoreland and applied for the Computer Support Specialist job when it came open this fall. He said he is thrilled to work at Rock Creek, where he will be on Tuesdays, Wednesdays and Thursdays; on Monday and Friday, he will be at St. George and Westmoreland elementary schools.

“I don’t think anyone will be able to do as good as a job as Ruby did, but I will try to keep things from breaking,” Davis said.