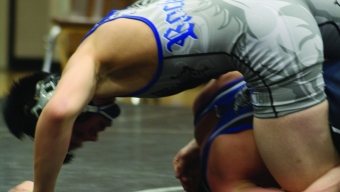 Wrestlers all around are beginning to cut weight or add weight for the upcoming season. Practice began Nov. 12 to get the wrestlers in shape, and this year, like every year, the Rock Creek wrestlers are hoping to go to state.

One major change that the team will encounter, though, is the move to 4A, which will affect the wrestlers’ regional and state competition.

“I have tougher competition, so I need to work harder; that’s it,” Reiss said.

Reiss also said that since he was ranked second in 3A, he is hoping to become ranked in 4A.

“I’m sad football ended so soon, but hoping to make this wrestling season on of the best,” Reiss said.

In preparation for wrestling season, along with his weight limits, Rieck said that his “diet consists of sandwiches, fruit and water.”

Though most diets for wrestlers are light on eating, they all mostly said that they missed not eating Thanksgiving dinner.

“I have coached some wrestlers to state, such as Reiss and Thomas,” Pray said.

Every season, there is something new, if it the new coming freshman to teams to face.

“Becoming 4A will affect us, though it’s the toughest league, we still work hard and hope for the best,” Pray said.