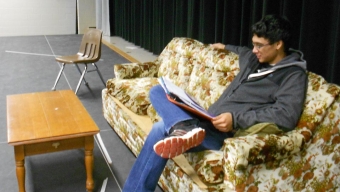 Director Keith Miller, who has directed about 15 plays, summarized the play as “a speech teacher who tries to teach a commoner to speak like royalty.”

The cast consisted of 16 members, with the lead roles earned by senior Sara Nider and junior Jackson Meyer. Since the cast members were announced, they practiced two or three times a week.

Junior Sarah Marek, who played the parlor maid, a bystander, and a party guest, said that practices were “all right, but sometimes it is hard because the leads are in sports. Everyone has been learning their lines well, though.”

Nider, who played Eliza Doolittle, agreed with her.

Nider said, “They’ve gone [well]. We’re a little short on practices, but I think we can pull it off.”

Marek, whose part consisted of speaking in a British accent, said, “I do [practice at home] actually, because I have a lousy accent. It has gotten a lot better.”

Miller said, “Well, it’s always the students. I think we have a good group of students who are locked in on what they’re doing.”