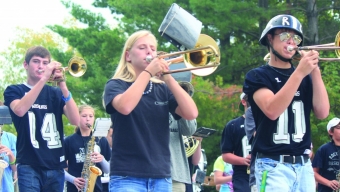 Throughout the month of November, the Rock Creek High School band has been very busy performing in different events.

The Veterans’ Day celebration at St. George Elementary School was on Nov. 7. At the school, the band played for the veterans, listened to speeches and listened to the state honor choir sing. “I think the band did well,” band instructor Scott Bradley said. “It is always nice to play for the veterans.”

Some of the songs that were played at the Veterans’ Day celebration were the “Patriotic Spectacular,” “Salute to Armed Forces,” “Star Spangled Banner” and “God Bless The U.S.A.”

Later in the week, the band marched in the Veterans’ Day parade, which went up Poyntz Avenue in Manhattan, on Nov. 9.

“We only played one song in the parade called the ‘Patriotic Spectacular,’” freshman Kitrina Miller said.

Out of all the school bands in the parade, the Rock Creek band was the only 4A school there. The other schools were either 5A or 6A schools.

“There were at least 20,000 people at the parade, and the band was one of the 90 some entries in the parade,” Bradley said.

On Nov. 16, the jazz band went to Baker University in Baldwin City, Kan., for a jazz festival. The band played for an audience, as well as judges. After the band was done playing, the judges worked with the band and rated them on how well they did in their performance.

On Nov. 19, the fall jazz concert was held in the commons of Rock Creek at 7:30 p.m. The Washburn University jazz band also played with the Rock Creek jazz band for this concert.