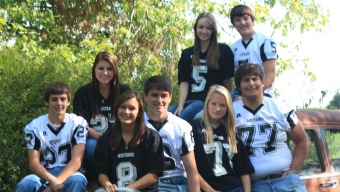 Monday, Sept. 23 was the beginning of Homecoming week at Rock Creek High School.

Homecoming Week is also known as Spirit Week. Most the students enjoy Spirit Week, but others have a different opinion.

“It sucks,” football head coach Mike Beam said, adding that he “thinks it gets the football team unfocused for Friday’s game.”

During Spirit Week, Monday was Fake Injury Day, in which students came to school wearing bandages and casts. Junior Will Henry, who was in a wheelchair and was missing a leg, and junior Morgan Schwinn, who had a knee brace and a bandaged head, were the winners.

Tuesday was Superhero Day, where students dressed up like their favorite superhero. Freshman Isaiah Dobbins, who dressed as Superman, and senior Jessie Niemeyer, who was a Ninja Turtle, were the winners.

Wednesday was Twin Day, in which students dressed up together, and was many of the students’ favorite day due to the high participation rate. The winners of this day were sophomores Alex Feldkamp and Jackson Goodmiller and junior Brett Hammett, who all  dressed up as “neature” walkers who explored the wilderness.

Thursday was favorite color day, where students dressed in their favorite color. Senior Josh Roberts, who dressed in all white, and freshman Ali Snapp, who wore an all-blue outfit, won that day.

Friday was Black and White Day; students wore white and black to school and show school spirit. The winners of that day were senior Kelsey Cook, who was all dressed up in black and white, and sophomore Dillon Glassford, who wore an all-black morphsuit. After school was dismissed early, the students attended a parade and a pep rally in St. George to get them excited for the game.

“I was very peppy,” Goodmiller said.

That night, though, the Mustang football team suffered its second loss of the season. The final score of the game was 36-33 in favor of the Rossville Bulldogs.

At halftime of the game, senior boys Tyler Dillon, Jordan Ebert, Dylan Meyer and JT Weers and senior girls Cheyenne Deyo, Paige Nickell, Sara Nider and Megan Srna were on the field awaiting who was to be named Homecoming king and queen. The winners were Weers and Nider.

“I felt like everyone liked me,” Weers said about being crowned king.

After the game was the Homecoming dance, where students gathered in the cafeteria from after the game until midnight to move to the beat of the modern music being played. Students who won a Spirit Day were let into the dance for free.

“I thought Homecoming week was very enjoyable and was fun because the guys had a tough football game which was exciting to watch,” junior Ryan Schneider said.