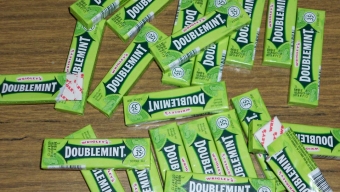 The Merriam-Webster Dictionary defines superstition as “a belief or practice resulting from ignorance, fear of the unknown, trust in magic or chance, or a false conception of causation.”

So, actions such as eating “green gum,” telling jokes and going to Subway are all different superstitions the Rock Creek sports teams have. They are all done in order to not break the mojo of the team or of an individual.  If you play sports, think about why you have superstitions. Are you afraid that something bad is going to happen to you if you don’t? Are you going to get hurt if you don’t?

The superstitions vary depending upon the sport. In fall sports, the superstitions are actions, such as sophomore Ryan Schneider’s cross country routine of praying and listening to music.

This is quite different from winter sports, such as basketball. The boys basketball team has had “green gum” handed out to them before every game since head coach Jim Johnston has been at Rock Creek. The idea behind the gum is that it helps to calm nerves and hopefully more relaxed play on the court.

Junior Adam Schmitz was asked if he liked the gum before games, and he said, “Yes, it helps mentally and calms nerves.”

Another superstition the varsity boys basketball team has is going to Subway on the days of home games. So far, the boys are undefeated at home, so this superstition is obviously proving true. Junior Jacob Miller said he thinks that the Subway before home games does help to get ready to play.

In the spring sports, the superstitions are taken to a whole new level. Everything from wearing the same socks and having the same pre-game routines in every baseball game to telling jokes in softball is covered.

When asked about superstitions the softball team has, head coach Jeri Brummett said, “The jokes loosen up and help to relax players.”

Junior Shane Adams said he believes that baseball is the most superstitious sport.

When anybody is playing baseball, keeping the same routine and even wearing the same clothes under your uniform are vital to a good performance.

Superstition in sports covers everything from keeping a Reggie Miller jersey in your gym bag during basketball games to wearing a band-aid on your face. Whether the superstitions are working or not it is clear that they are all essential to be able to perform at an athlete’s best. While all superstitions are very different, and they change from between sports one belief remains true: superstitions do help to perform better no matter what sport you are playing because athletes believe they do.