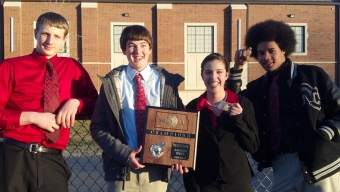 Debate has won a total of six trophies this debate season, but capped off their regular season with a first-place at regionals on Dec. 17 at Topeka High School.

Participating in the regional win were juniors Crystal Chitwood and Jacob Miller on the affirmative side and juniors Dylan Meyer and Josh Roberts on the negative side.

“I am really, really happy for the students,” coach Keith Miller said. “I’m not sure people understand how much effort it takes to debate.  The students did a great job.  Two of the students, Josh Roberts and Jacob Miller, were battling illness all day.  Josh was really sick.  Those two displayed great mental toughness.  Throw in the fact that they had beaten a tough Centralia boys varsity basketball team the night before, and you can’t help but admire their efforts.”

During the season, the debaters achieved first place at Rossville and Riley County, second place at Highland Park and Osage City and thirds at Salina South JV and Silver Lake. The season has been different sense they replaced paper and crates full of files with laptops. Even with that, they’ve won the usual amount of trophies won at every season.

“We could always do better,” Keith Miller said. “I am looking forward to next year. We’ll have a year of computer experience under our belt, which will help.”